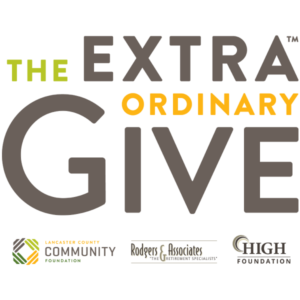 YWCA Lancaster will host a unique, artistic event during this year’s ExtraGive. Over the past year, the organization has brought to life the hero campaign, a movement that focuses on giving names and faces to the heroes of the Lancaster community through storytelling.

At this year’s ExtraGive, YWCA Lancaster will set up in Penn Square outside the Blakinger Thomas, P.C. Building. The organization’s event will center around two large blank canvases. The first
will showcase local artist Loryn Spangler-Jones, owner of LSJ Studios located on King St. During the day of ExtraGive, Loryn will paint in the square for all to see.

Loryn shares her sentiments on working with YWCA, “ I am grateful once again to partner with such an amazing organization that gives back in so many ways to my community! I am looking forward to translating the love, support, and joy the hero campaign is bringing to our community! Art is community.”

This piece will be the artist’s interpretation of the services YWCA offers, including child care, housing placement, and sexual assault support. Community members who enter their name for giveaway
prizes may add their own artistic flares to the second canvas with paints and brushes that YWCA will provide.

In the seventh year of ExtraGive, YWCA Lancaster looks to make waves in the community not only through fundraising but also through awareness. The focus of the organization’s ExtraGive event is
spreading awareness of the services it provides, working in tandem with YWCA’s ongoing hero campaign. The organization encourages all members of the Lancaster community to visit their table to
learn more about YWCA Lancaster, contribute to the collective canvas, and donate.

“The money raised during the ExtraGive will be used exclusively here in Lancaster County to fund programs designed to eliminate racism and empower women. Such programs include our sexual
assault counseling center, emergency, and affordable housing and social justice education just to name a few,” says Michelle McCall, CEO, YWCA Lancaster.