Because of this historic moment, YWCA of Lancaster is the 21st stop on the African American Historical Society of South Central Pennsylvania new self-guided tour. In collaboration with the City of Lancaster Office of Promotion (LOOP) and four other community organizations, the Historical Society just released its new Map & Guide, highlighting more than 24 sites in the City of Lancaster, PA Government that tell the story of the African American experience, from the Colonial Era to the mid-20th century.

The map & guide is free and is available at various locations throughout Lancaster County, including YWCA of Lancaster. Pick up yours today to begin exploring the important stories and historical African American sites located within Lancaster’s original town plan.

YWCA Lancaster is dedicated to eliminating racism, empowering women and promoting peace, justice, freedom and dignity for all.

When former President Jimmy Carter spoke out earlier this week on human rights, especially where they concern women, we found his words to be both bold and powerful. Several quotes stuck out to us that we would like to share with you.

“We must also realize that women are key agents of the changes we need… We need to amplify the voices of peacemakers and human rights defenders, especially women.”

“What is needed now, more than ever, is leadership that steers us away from fear and fosters greater confidence in the inherent goodness and ingenuity of humanity.”

“When half of the world’s population is not consulted on important decisions and policies, it is no wonder that so many problems persist.”

“Societies that exclude or permit abuse of women are more violent and warlike, while having women at the forefront of peace efforts or community dialogue tends to calm tensions and avert hostilities.”

“When women are empowered in significant numbers, in the corporate world as well as in politics and in daily life, better decisions are made and more sustainable solutions are adopted.”

Growing up as an abled, cisgendered Latina/Hispanic, it took time for me to understand structural violence towards marginalized groups.  However, as an ally, I have been able to learn about the way normative notions in our culture affect our identity and the identity of those around us.

Becoming an ally is the first step towards deconstructing our unjust society.  An ally is a person who wants to fight for the equality of a marginalized group that they’re not a part of. Although the fight to eliminate racism may seem scary and confusing, if you work on these five simple steps, you will have a solid foundation for helping to effectively fight oppression.

Often time’s privilege is seen through a negative lens.  Privilege does not mean you haven’t had gone through difficult experiences. However, it does acknowledge that there are some things that you will never experience or have to think about just because of who you are. By identifying that privilege, you not only learn more about yourself, but you learn more about others and their experiences.

As an ally the last thing you want to do is speak over the very people who experience the oppression/violence you are fighting. Sit back and listen instead. Sometimes the best way to lead is by following. It is also important to do your own research on the communities you want to support. The only way to be an ally is to educate yourself.

This goes along with the idea of being a leader by following. You can show support by using your privilege and speaking about these issues with others who do not see the way oppression affects us all. However, one thing to keep in mind is to not speak over the members of the community you are trying to support or take credit for things they have already said.

Living in a society that has so deeply ingrained certain beliefs in our brain, it can be very difficult to unlearn problematic things. However, it is always important to lean into that discomfort, take the time, and do the hard work to deconstruct those things. If and when you do make mistakes, remember that it is not about intent (whether or not you meant what you said); it is about the impact. It is about what you said and how you offended other. When you get called out remember to listen apologize and commit to changing your behavior and move forward!

Being an ally involves action. You have to do numbers 1-4 actively in order to fight oppression. Just by saying you’re an ally doesn’t make you one. You have to earn it.

Here at the YWCA, we address many issues, and one of our principle missions is eliminating racism. Through our various intensive programs and day events, we try to not only define and identify racism but work to eliminate it. The YWCA wants to be proactive in solving the systemic oppression that affects the black community in Lancaster.

If you would like to become a part of this dialogue, contact Nick Miron at nmiron@ywcalancaster.org and ask about YWCA Lancaster’s Study Circle Program.

Lancaster, PA – YWCA Lancaster hosted its Annual Meeting on Thursday, November 5 to celebrate the inspirational work of our volunteers and community leaders who help to make the YWCA’s mission of eliminating racism and empower women a reality here in Lancaster.

YWCA Lancaster was happy to honor Carol Rae Culliton as the Citizen of the Year due to her incredible support of providing necessary services to her neighbors in Lancaster.

This recognition is a tribute to her generous support of the YWCA’s Annual Campaign, her leadership with the STEM Sisters program at the North Museum, and her family’s distribution of food and toys to hundreds of Lancaster residents – including the parents and children served through the YWCA’s childcare and residence programs.

Last month the internet was flooded with video footage of deputy Ben Fields slamming an African American student to the ground at Spring Valley High School in South Carolina.

It began when the teacher could not get the student to put her phone away. When he couldn’t get her to follow instructions, the school’s resource officer was called in for help. The young girl repeatedly ignored the officers commands so he proceeded to flip her out of her seat, drag her across the classroom floor and arrest her.

Ben Fields has had a history of acting rough with students. Back in 2013 NBC News reported that Field was named as a defendant in a federal lawsuit that claimed he “unfairly and recklessly targets African American Students with allegations of gang membership and criminal gang activity.”

Spring Valley has raised a lot of questions about our policing system. Whether there is a difference between protection and fear. Whether it was reasonable, necessary even, to use such force on a young student. Whether this violence was motivated by racism.

This story is nothing new; the past couple of years have been filled with countless instances of police brutality. Grass roots such as #BlackLivesMatter have taken a place in everyday conversation in hopes of raising awareness on the various ways black lives are targeted economically, socially, and politically in our society.

A few days after the event took place, news spread that the officer was a graduate of Lancaster Mennonite High School. Although the incident did not occur here, discrimination surely is here; it is everywhere. According to the St. Louis Post Dispatch, African Americans were 66 percent more likely than whites to be stopped by police during 2013 in Missouri.

Where an officer comes from is of no importance because the same incidents have been happening in our nation for years. This isn’t the first time the police have taken advantage of their power; this isn’t the first time black lives were targeted in our criminal justice system. The officer could be from Ferguson, Missouri, Waller Country, Texas, Staten Island, New York, and the list could go on and on. The issue isn’t where the officer comes from, but rather the way the criminal justice system disproportionally targets black lives.

Where does this discrimination come from? The American Civil Liberties Union (ACLU) believes that more than 240 years of slavery and 90 years of legalized racial segregation have led to systematic profiling in the criminal justice system.

Instead of keeping its people safe, our criminal justice system is mistreating marginalized groups in America because of perceived stereotypes of people of certain race, class, or religion. Injustice has led to law enforcement losing credibility by not meeting the policing standard of serving and protecting. What we see today are citizens participating in grass roots and riots as a means to protect themselves.

Here at the YWCA, we address many issues, and one of our principle missions is eliminating racism. Through our various intensive programs and day events we try to not only define and identify racism, but we try to eliminate it. The YWCA wants to be proactive in solving the embedded systemic oppression that affects the black community in Lancaster.

If you would like to become a part of this dialogue, contact Nick Miron at nmiron@ywcalancaster.org and ask about YWCA Lancaster’s Study Circle Program.

Extraordinary Give invites us to unite and participate in a true celebration of giving. During Extraordinary Give be sure to stop by the Great Giving Gig at Tellus 360. Hosted by 14 non-profits in Lancaster, from 10am until 10pm, there will be musical entertainment, food, beverages and giving stations set up for anyone who would like to donate to their favorite organizations. The event is free and is a great way to support all of the extraordinary organizations that make our community extraordinary.  If you want to make a gift to the YWCA during the #ExtraGive, visit https://extragive.org/#npo/ywca-lancaster.

What happens when you get a group of teenage girls in a room to talk about science?  Sparks fly!

YWCA Lancaster’s TechyGyrls program is going to be featured at the North Museum’s STEM Sisters Winter Meetup on February 8th.  Through hands-on activities that highlight STEM principles and careers, we’ll be getting the girls excited about their futures.

The girls will also be given the chance to connect with other girls that share their interest as well as meet some female mentors who work in STEM fields.  If you have a young girl in your life that you would like to get involved with either TechGyrls or the STEM Sisters program, please contact Kaity Nordhoff at knordhoff@ywcalancaster.org. 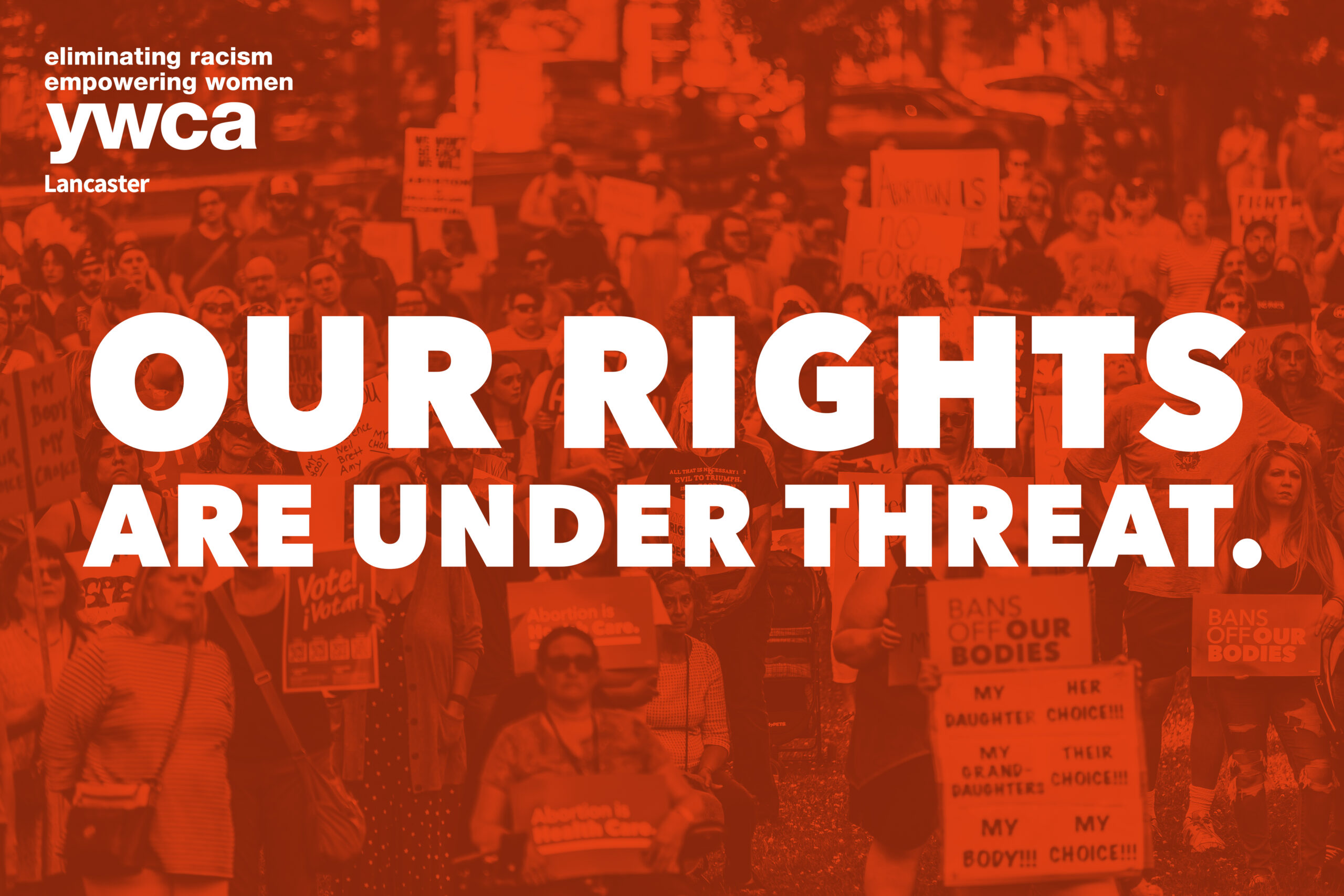 We need your help in the movement for reproductive justice, so you and your community can choose its own future.

You have successfully subscribed to the newsletter

There was an error while trying to send your request. Please try again.